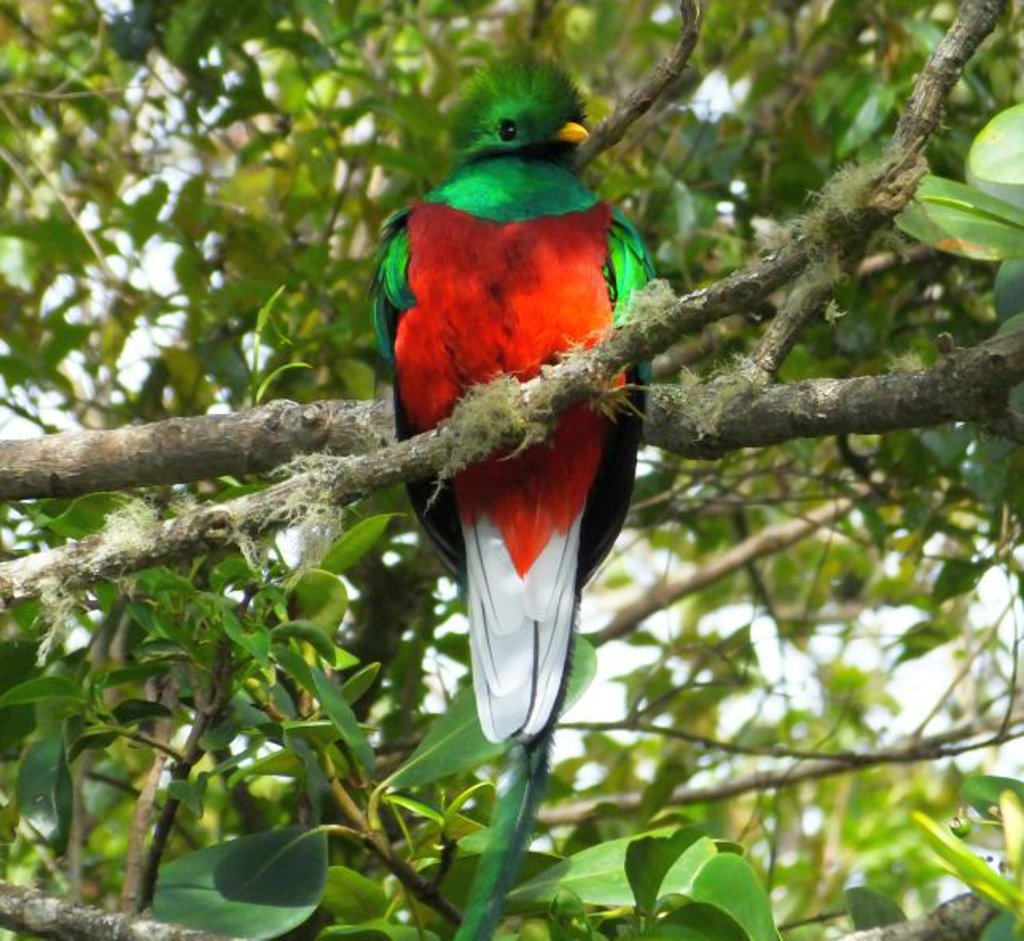 There are beautiful birds and then there are birds that look so incredible, so exotic, they are believed to be sacred messengers of celestial beings. Since a bird needs a bit more than fancy plumage and a pretty song to be linked with heavenly realms, very few species have been given this role. However, if there was one bird species that fit the bill, it would have to be the Resplendent Quetzal.

A fairly large, shining emerald, jade and aquamarine bird with red velvet, snow white highlights, and an improbably long tail, the Resplendent Quetzal more than lives up to its name. When a male gives a display flight over the misty cloud forests where this breathtaking bird species lives, it’s easy to see why Mayan peoples viewed the quetzal as a messenger from the Gods. Indeed, this very special bird is still considered sacred by many modern Mayan people and, not surprisingly, is the national bird of Guatemala.

The Resplendent Quetzal occurs in cloud forests from southern Mexico to Costa Rica and western Panama but is especially easy to see in Costa Rica. In Costa Rica, healthy populations are found in cloud forests in much of the country and thanks to much of these forests being protected in national parks and other reserves, quetzals are doing quite well. Even so, despite their spectacular appearance, they can still be surprisingly tricky to see. These are some tips to lay eyes on one of the most spectacular birds in the world:

As with any bird, you won’t see a quetzal unless you visit the right habitat. For the Resplendent Quetzal, that would be cloud forest from around 1,400 meters to the tree line. If you spend a day looking for birds in this type of habitat (and with a fair bit of patience and binoculars), you have a fair chance of seeing a quetzal.

Listen for their Whistled and Cackling Calls

It’s much easier to locate a quetzal if you know what they sound like. Although larger than a pigeon, quetzals can hide very well because they tend to sit still for long periods of time. However, they do give whistled calls, songs, and a peculiar cackling vocalization. Listen for those sounds and you have a much greater chance of finding a quetzal.

Look for the Right Fruiting Trees

This is probably the most important tip for finding a quetzal since these big trogons tend to spend most of their time at trees with small green or purple fruits. Known as “aguacatillos” or mini avocados, the fruits might remind you of a green or purple acorn. If you find some trees covered in those fruits, a quetzal will probably show up at some point.

The most reliable way to see one of these truly amazing birds is by taking a tour with someone who knows where they live. Several such tours are offered in cloud forest near San Ramon, the Monteverde area, and especially in the high elevations of Cerro de la Muerte and the Dota Valley. However, quetzals also occur at sites much closer to the Central Valley and Villa San Ignacio. The forests of Volcan Poas in particular can be very good for seeing quetzals, they are often found on birding trips to this very accessible site when looking for hummingbirds of Costa Rica and other species.

Visit the Best Sites to See Them

Once again, patient birdwatching in any area with cloud forest is a good way to see a Resplendent Quetzal in Costa Rica. Some of the most accessible sites are the Poas area, Bajos del Toro, the Monteverde area, and Quetzal National Park and various other sites in the Talamanca Mountain range.

Want to see quetzals when staying at Villa San Ignacio? The Resplendent Quetzals of Poas Volcano are just a 30 to 40 minute drive up the road. You will have to spend some time looking for them and you will have a much better chance with a guide but this spectacular bird does live there!