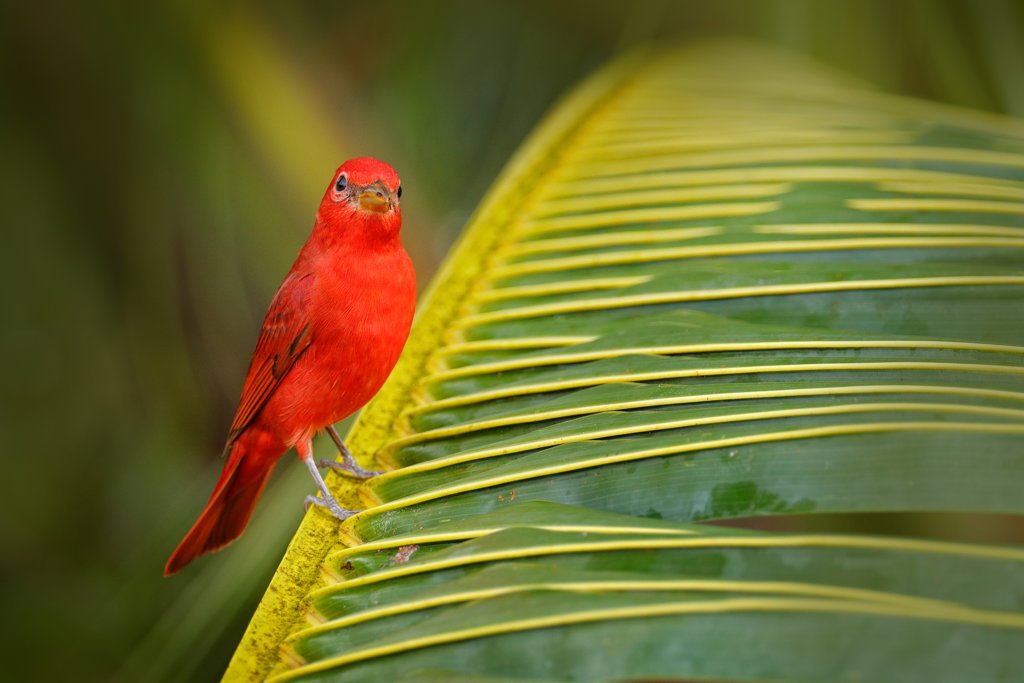 Many of us have different outfits for different times of the year, some of those differences are related to how warm or cold we want to be, others reflect our personal tastes in fashion. Birds of course don’t have clothing but many still “dress” for the season.

In the spring, when most birds are looking for a mate and to raise a brood, they need to look their best. In general, it’s the males who have to make an impression and many species do so by way of song and appearance. This is why so many smaller birds like orioles, tanagers, and wood-warblers sport bright and beautiful colors in the spring and early summer. The better they look, the more vibrant the plumage, the more likely it is that the male has good, healthy genes that will result in healthy offspring. At least that signal is being instinctively given to and received by female birds and why they are believed to be more likely to pick males that sing and look a certain way.

To be ready to find a mate and breed, Scarlet Tanagers change their feathers just before the breeding season. It takes energy to grow new feathers but since old feathers wear out, and new ones can be used to find a mate, getting that new feather coat is worth it.

But why not just wear that same coat all year long? Why not change feathers once in a while?

In common with many other small birds, brightly colored birds like the male Scarlet Tanager don’t sport that eye-catching attire all year long. They probably don’t show those bright feathers because although it works to attract a mate, it probably also works just as well to attract predators.

While such bright attire might serve its purpose on the breeding grounds of the north, when they head south, the brilliant showy red and black feathers could act a little too well as a welcome sign that says, “Catch me!”

To avoid standing out in the predator-rich rainforests of their wintering grounds in South America, male Scarlet Tanagers replace their bright red feathers with a much drabber olive green outfit. In fact, they molt into that less obvious look long before they reach western Amazonia and is why we don’t see bright red male Scarlet Tanagers during fall migration. During the later winter months, they start to molt back into beautiful red and black breeding plumage but don’t usually finish that change until they are well under way on their trip back north.

Many other small birds follow a similar pattern of changing their feathers for a dull plumage in the fall and then changing back into a brighter, more colorful set of feathers for the spring. Although the duller feathers likely help them avoid predators on their wintering grounds, blending in with the surroundings might be even more important during the perilous flight south. Fall is when they have to share skies and unfamiliar surroundings with numerous hawks and falcons that are also undertaking migration, hungry, and ready to catch and eat small birds. Not to mention, having a new set of feathers also helps when you have to fly a few thousand miles!

At Villa San Ignacio, we see some Scarlet tanagers during migration but a lot more of the related Summer Tanager during the winter along with Chestnut-sided Warblers and many other beautiful migrant warbler and resident species. Most show that duller, winter plumage but they are still fun to watch when birding in Costa Rica.

Blog by Patrick O’Donnell.
Patrick O’Donnell started birding at the age of 7 in Niagara Falls, NY. A biologist by trade, he has worked on bird-related projects in a number of places and has guided birders in Ecuador, Peru, and Costa Rica. Patrick has lived in Costa Rica since 2007 and when not birding, writes about birds, travel and tourism, and other topics.