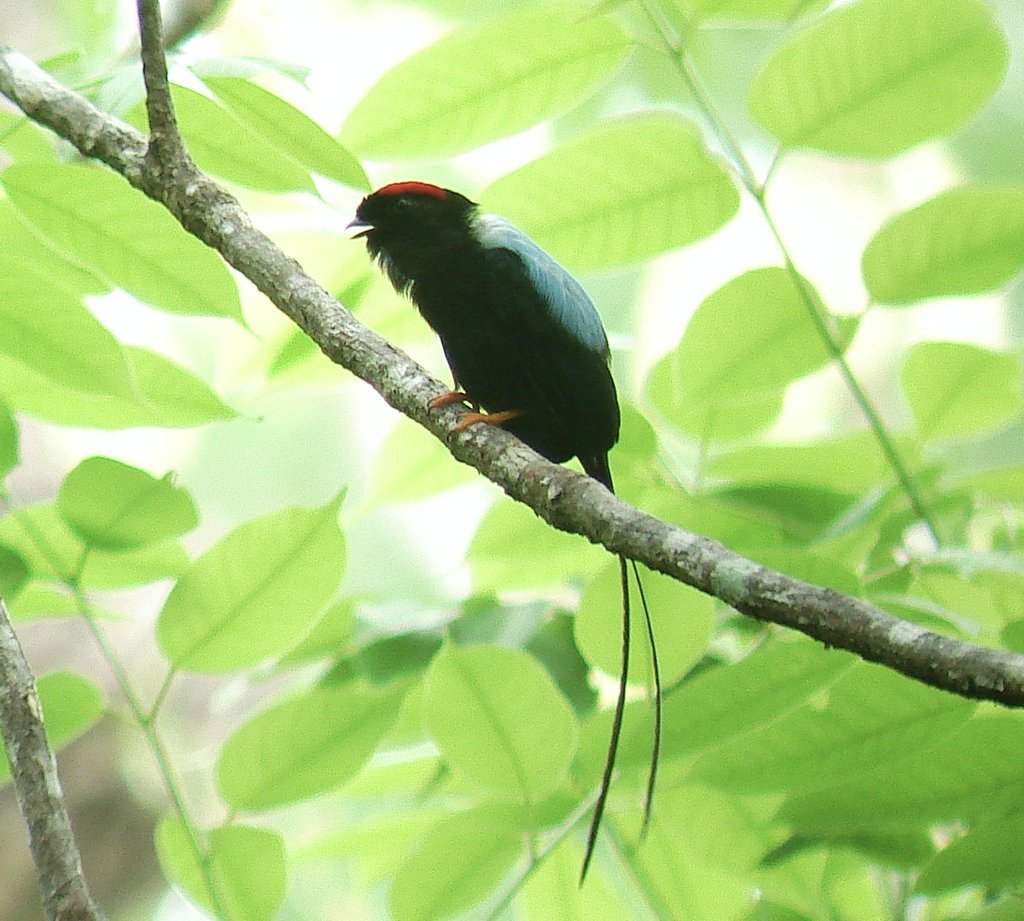 As usual, I heard them long before seeing the birds. They were saying the name that Costa Ricans give to this beautiful little bird, “Toledo! Toledo!”  As the Toledo sings,  I quietly and slowly move toward the birdsong hoping to see the Long-tailed Manakins.

Searching for the Long-Tail Manakin at Villa San Ignacio

Otherwise known as the Long-tailed Manakin, a couple of Toledos were calling from the forest at Villa San Ignacio. I have seen Long-tailed Manakins several times before throughout the property, but on this day, they sang from the other side of the garden wall.  That’s where the trails are, in an area of regenerating forest connected to a forested riparian zone.

It’s not a vast area of habitat, but based on bird counts I have done at Villa San Ignacio, the regenerating forest is big and mature enough to support a healthy range of species. This gives me hope that reforestation is possible, even in such heavily populated areas as the Central Valley of Costa Rica. It can also give us views of the Long-tailed Manakin.

Seeing other birds along the way

The best part of searching for the hard to see Long-Tailed Manakin is the other birds you will see along the way.  One of the fancier birds waiting to be seen in Costa Rica, is a small frugivore that can be quite common in seasonal dry-forest. However, despite the bright colors, it can also be surprisingly unobtrusive. When I heard them calling from the trails at Villa San Ignacio, how could I not go and look for those turquoise-mantled beauties?

As I ventured onto the trails, I kept a close eye on the surrounding vegetation. The manakins could be anywhere. Other birds were also around. I slowly moved forward, and a flash of blue and green caught my eye. Patient scanning revealed one of the other beautiful birds often seen at this birdy site, a Lesson’s Motmot.  This was not the bird I was looking for, but motmots are always easy on the eyes!

“Toledo! Toledo!” As I admired the motmot, the manakins reminded me to stay focused, to keep up the search. They sounded close, but no matter how much I peered into the vines and tropical trees, I just couldn’t see them.

All I could do was wait for the small birds to make the first move; stay patient, keep still, and keep looking. That approach wasn’t anything new.  This is how birding usually goes; there are birds out there.  Costa Rica has more than nine hundred birds recorded, but no one knows precisely when they will appear. All you can do is go to the best place to look and patiently watch for them. Birds eventually come into view and, that day at Villa San Ignacio was no exception.

As I heard the manakins call again, I carefully moved up the trail and caught a glimpse of movement.  I spotted a bird in the tree like a woodpecker, except that it was plumaged in different shades of brown and dotted with spots and streaks. The shape of the beak told me that it was a Cocoa Woodcreeper, a good find for the Central Valley, and a sign of quality habitat!

I watched the woodcreeper use its bill to shake a dead leaf but kept my ears open for prettier birds, those that went by the name, Toledo. Sure enough, it wasn’t long before they called again, this time off to the right. I scanned and peered into the trees and caught the briefest hint of movement. Probably just a leaf in the wind, maybe even a butterfly but better to check it with binoculars, better to give my vision a boost. Focusing where I caught that movement revealed a small black bird, what I had noticed was the bird flicking its wings and long tail. No doubt about it, nothing else has those long, slender tail feathers, a
Long-tailed Manakin…

Wondering why it was so hard to find, I took my binoculars off the bird and then back onto it. When I look without binoculars, the Long-tail Manakin’s dark colors seem like any other shadow, any other dark leaf.  It is unbelievable how a colorful bird like that can blend in! Eventually, it showed its colors, the shining blue back, the velvet-red crown, and I was reminded of the importance of being patient, carefully checking any hint of movement when birding the trails at Villa San Ignacio.

Blog by Patrick O’Donnell.
Patrick O’Donnell started birding at the age of 7 in Niagara Falls, NY. A biologist by trade, he has worked on bird-related projects in a number of places and has guided birders in Ecuador, Peru, and Costa Rica. Patrick has lived in Costa Rica since 2007 and when not birding, writes about birds, travel and tourism, and other topics.

Our Fear and Fascination of Snakes