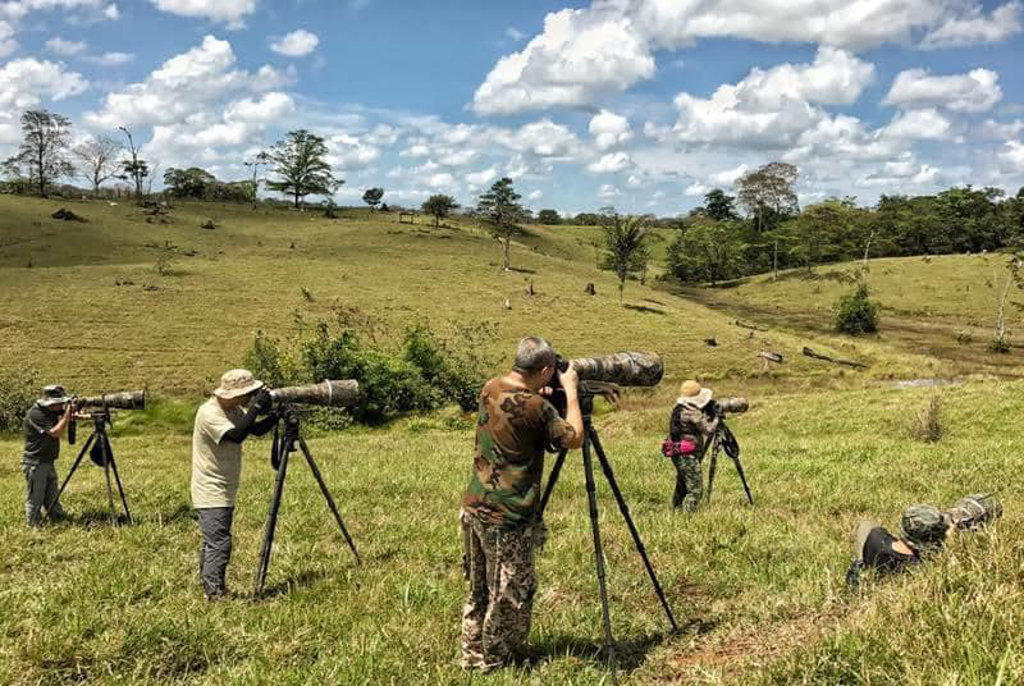 Northern Costa Rica is well known for Guanacaste’s pristine beaches and somewhat less visited by birdwatchers than the central and southern areas. There are areas, however, worth noting. Northern San Carlos and Guanacaste are home to valued national parks and active volcanoes. Birdwatching is a year-round activity, but birdwatchers flock to Costa Rica during the drier seasons, November through April. In the dry season, particularly Guanacaste, it is much easier to spot birds sitting in trees that have shed leaves to survive the drought.

An emerging birding hotspot, the Maquenque Wildlife Refuge, was established in 2005 to protect the unique almond tree habitat and the endangered great green macaw. Located in the San Carlos province, this refuge is part of the Nicaragua-Costa Rica Border Corridor National Wildlife Refuge. Maquenque covers 51,855.10 hectares of wet tropical forest, lagoons & swamp. Although less explored than other areas in northern Costa Rica, this newly founded refuge has recorded 424 birds.

The Palo Verde National Park is on the Ramsar List of Wetlands. An essential marsh of Central America, the area is a sanctuary for migrating and resident waterfowl. In this hotpot, birdwatchers see storks, herons, egrets, grebes, ibis, ducks, jacanas, web-footed birds, among hundreds of other birds & wildlife species. On the park’s 19,800 Hectares, Palo Verde has 11 distinct habitats. With the tropical dry forest disappearing at alarming rates in Guanacaste, the OTS (Organization for Tropical Studies) and MINAE (government environmental offices) now monitor the park with the shared mission is to restore its wetland. Regenerating this dry tropical forest has become more intense as climate change continues to create even dryer conditions. In addition to visitor’s entrance fees, Palo Verde National Park receives support from partners like the University of Costa Rica, the private Foundation Llano Verde, and several other national and local government offices.

Southern Costa Rica, especially the lowland rainforest, is the storybook version of Costa Rica, colorful tropics and, populated jungle. Much of this area is still without electricity, any power supplied by generators. Access to most of southern Costa Rica requires a mix of travel by commuter plane, boat, jeep or shoreline hike to your hotel. This heavenly hotspot is well worth the effort to get there for birders interested in an adventure while birdwatching in Costa Rica.

The Osa Peninsula is the largest tract of lowland rainforest in Central America. National Geographic refers to the Osa as “the most biologically intense place on earth.” This birding hotspot beholds an astonishing 3% of the world’s biodiversity. On the relatively small peninsula, lies Corcovado National Park. Internationally known for its big cats, tapirs, Corcovado is the only place where the Howler, Spider, white-faced capuchin, and Squirrel Monkey dwell together. If there is such a thing as a lazy birdwatcher, the Osa is this birder’s hotspot. Perch in a café with a forest view or lounge on a comfy chair on a hotel patio, and birds will flock to the lazy birder. Birdwatchers will see scarlet macaws (the Osa has the largest population of scarlet macaws in Central America), toucans and thrilling mixed flocks.

The highest elevations of Costa Rica are within the Cordillera Talamanca, in the southern segment of the mountain range of that runs from Guanacaste and into Panama. The high humidity and lower temperatures are inducive to “paramos” vegetation with tall grasses, herbs, mini bamboos and, club mosses. The Talamanca Highlands are cloud-forest of trees covered with bromeliads, ferns, and orchids. Birdwatchers must navigate the altitude and dense forest, but birdwatch spellbound by its mystical appearance. This birding hot spot is home to the Resplendent Quetzal. A brightly colored bird with a one-meter tail is not easy to spot in a misty cloud forest. A siting of the Resplendent Quetzal is a highlight for all birders.

Popular Birding hotspots have strong roots in Costa Rica. As early as 1954, visionaries established sanctuaries to protect the virgin forest environment and its inhabitants. La Selva originated as a study-site on mixed plantations for the improvement of natural resources management. The individuals with private study areas and sanctuaries methods laid the groundwork for Costa Rica’s officially protected land and the laws to protect biodiversity. The first national park was founded in 1963 when 1,172-hectares previously owned by foreign residents became Cabo Blanco National Park. Since 1963, Costa Rica has added 1.4 million hectares of protected areas.

By 1960, La Selva was an established farm dedicated to sustainable forest research. With ongoing forest research, this location evolved into the La Selva Research Station under the leadership of the OTS. Worldwide, La Selva Biological Station is a leading institution in tropical ecology with training and research opportunities for professional scientists. In Costa Rica, La Selva pioneered private forest conservation and, the La Selva Biological Station has laid the groundwork for many of the country’s laws to protect its land. OTS maintains 1,600 hectares of well-preserved old-growth and recovering wet lowland tropical forest.

Monteverde is on the top of the Tilarán Mountain Range. A typical thick mist shields the trees and plants from the hot tropical sun. This cloud forest is famous bromeliads, orchids, draping moss, and the hanging bridges tourists use to view them. The Costa Rican government opened up Monteverde, inaccessible by car in the 1950s, to the Quakers (a small group escaping the Korean War Draft) to create infrastructure and farm. An ornithologist who traveled to Monteverde in the 1970s was so impressed with Monteverde’s biodiversity, he sought out and met with the Quakers. Managing deforestation to protect this area would now be incorporated into plans for Monteverde. That first preserved area is now the Monteverde Cloud Forest Preserve.

Hotel Villa San Ignacio, in the 1970s, benefitted from a biologist. Between its origins as a private home and the late 1980s when the owners of Hotel Las Orquídeas Inn took over, the property was owned by a Duke University professor with ties to the Organization for Tropical Studies. With a variety of mature trees that are home to hundreds of species of birds, Hotel Villa San Ignacio makes the perfect place to stay when birdwatching in Costa Rica. Excited birdwatchers can start spotting birds on their first morning right in our backyard with our guided birding tour at Hotel Villa San Ignacio.

>>> Stay at the best hotel in Costa Rica for birdwatching

8 Things to do in Alajuela Costa Rica with 48 Hours