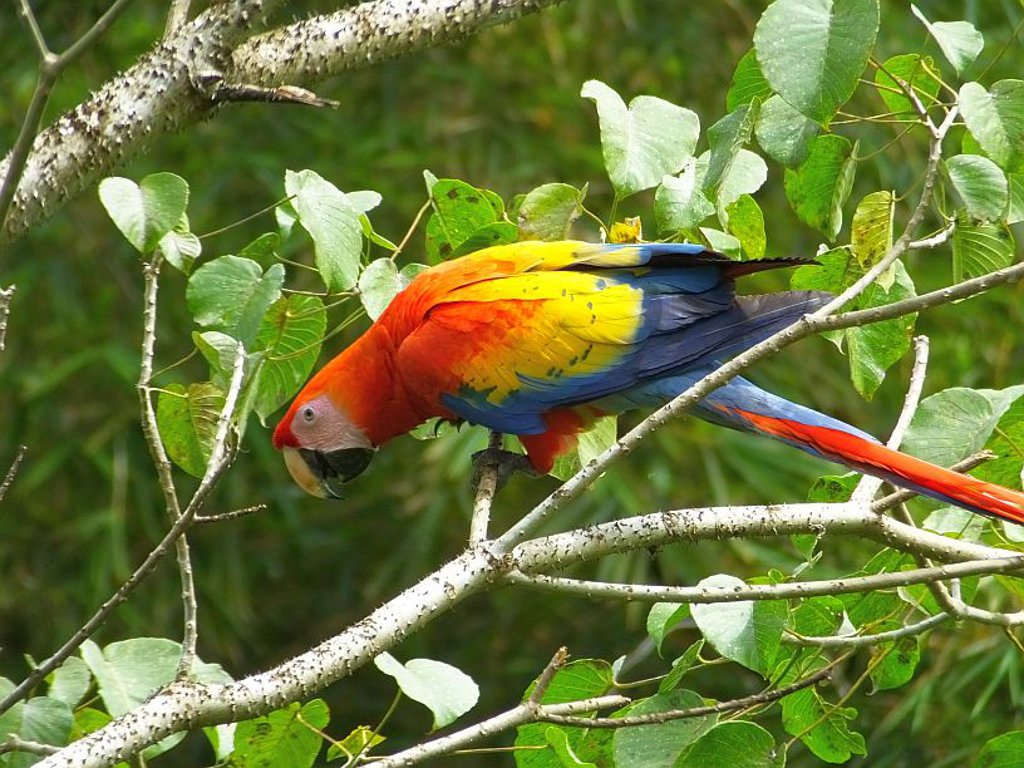 Parrots are the quintessential tropical birds. Whether one has visited or only imagined walking in “the jungle”, these evocative and intelligent birds capture our attention and imagination. Occasionally seen in commercials and popular as pets, the bold colors and loud calls of parrots are indeed an actual part of the tropical forest experience. Some parakeets and parrots also occur in tropical gardens, especially in Costa Rica.

In Costa Rica, quite a few parrot species thrive as long as they have tree cavities for nesting, enough fruiting and seeding trees where they can forage, and aren’t persecuted by people. The following five species are some of the more frequently seen parrots in Costa Rica:

A common urban and garden species in much of Costa Rica including Villa San Ignacio.

Locally known as the “Chucuyo”, this smallish parrot occurs in wet tropical forests and green areas of the Central Valley. Small flocks are often seen in screeching flight as they fly to and from fruiting trees. Like other parrot species, White-crowned Parrots go quiet while feeding as one or two birds in the flock keep an eye out for hawks and other possible predators.

Where to see White-crowned Parrots

This medium-sized parrot can be recognized by its green plumage with red on the front of the wings, and white above a pale bill. Most common in tropical dry forest, small flocks are regular in the eastern part of the Central Valley of Costa Rica. If you staying at Villa San Ignacio and hear a parrot screeching from the top of a tree, it might be this species.

Where to see White-fronted Parrots

Patches of forest in the eastern Central Valley, and many areas with green space from Tárcoles north to Nicaragua.

A smallish parrot with red under the wings, small flocks are typically seen in rainforest and cloud forest. However, they can also visit smaller patches of forest as they wander in search of fruiting trees, including parts of the Central Valley.

Where to see Brown-hooded Parrots

Look for these handsome birds in most national parks and places with rainforest or cloud forest.

A large, noisy and classic parrot, this is a common species in most lowland areas where patches of forest are interspersed with farms. It usually occurs in pairs at fruiting trees.

Where to see Red-lored Parrots

Look for these tropical beauties in any lowland areas with patches of rainforest. Pairs are often seen in flight in the later afternoon, note their shallow wing beats.

Saving the boldest of them all for last, this spectacular bird is hard to miss. Fortunately, thanks to effective protection, Scarlet Macaws have once again become common in Costa Rica. Watch for these big red macaws in many parts of the Pacific coast and around Sarapiquí.

Where to see Scarlet Macaws

The Osa Peninsula, near Jacó, and many other parts of the Pacific coast. They can also be seen in Sarapiquí and near the border with Nicaragua.

Watch for some of these parrots in Costa Rica and other bird species in the beautiful tropical gardens of Villa San Ignacio. Happy Hour in the Pandora Restaurant is the perfect place to celebrate bird sightings!