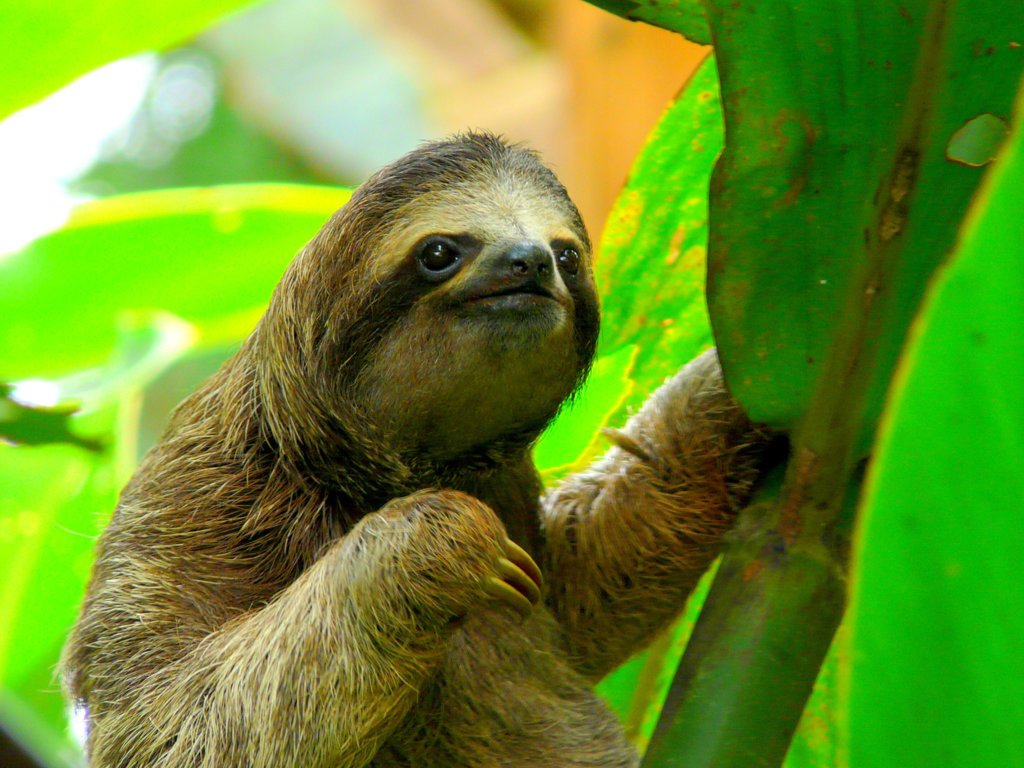 Sloths, Costa Rica’s famed furry ambassadors, have elevated the country to top-rated nature-based ecotourism. Commanding the number one spot for a few years, Sloths, specifically a Sloth-siting, is on most tourists’ list of things to see while traveling in Costa Rica. Charmed with star appeal similar to the Australian Koala, the Costa Rican Sloth has an adorable teddy bear appearance right down to a smile that looks sewn into its face. A peaceful animal, the Sloth charms the hearts of thousands of tourists who travel to Costa Rica for its rich biodiversity and breath-taking beauty.

Throughout the land of Pura Vida, Sloths move slowly, look infinitely happy, and can hang upside down for hours. They live in treetops where they source all of the food and water needed to survive. Sloths also find refuge from predators high up in the trees. Sloths are born with the ability to lift their body weight with one arm and can latch onto and hang from a branch for hours. Even if a wildcat manages to scale the tree, Sloths have the strength to withstand a savage attempt to tear them from their abode.

Sloths are not easy to see while camouflaged in the trees. Their fur mimics the tones of the tree trunks. Sloths are often mistaken for a bird or squirrel because they seem so small in the treetops. The two-toed Sloth lives in trees growing in the highlands of Costa Rica. A nocturnal species, someone will likely see a two-toed Sloth only at night. Areas to see them in Highland include the Poás Volcano national park, Barva, Tarbaca, Monteverde, the Talamanca mountains, and the higher elevations of Tilarán.

The three-toed Sloth lives in trees growing in lower elevations with hotter, drier climates. Even though the daytime will be very hot, the three-toed Sloth is sluggishly active during the day. The three-toed sloths live in lower regions such as Tortuguero, Corcovado, Manuel Antonio, Carara, Cahuita, Puerto Viejo, and the entire San Carlos and the Arenal plains and near the Tenorio National Park. On a shorter vacation in Costa Rica, consider visiting Bijagua Ranas, known by guides as the place to be sure you see a sloth in the wild. The privately-owned nature preserve has a thriving population of the three-toed sloths that are easier to see during the day.

Once a week, the Sloth will leave his tree to relieve himself. They lose up to one third its body weight during this weekly evacuation. With the slowest metabolism of any mammal, even one leaf can transit the digestive tract for 3 to 4 weeks. Both the slow digestion and the lower level of nutrients in tree leaves contribute to the amount of time a sloth spends asleep and the slower speed moving down the branch. Although they spend most of their time in the trees and are perceived to be slow and lazy, sloths can swim through water three times faster than they can move on the ground. They are also incredibly limber and flexible. Sloths survive a fall from 100 feet; and, they will fall from their treetop dozens of times during a lifespan. No doubt those cartoon diagrams of “sloth yoga” are inspired by their natural ability to do almost anything while upside down and its flexibility. Three-fingered sloths have two more neck vertebrae than any other mammal. With extra vertebrae, they can turn their heads through 270°.

A guaranteed way to see a sloth will be to visit an animal rescue center or sanctuary. Not only will you see sloths, you will support Costa Rica’s efforts to protect and rehabilitate injured animals. Most rescue centers depend on entry fees or donations made by visitors.