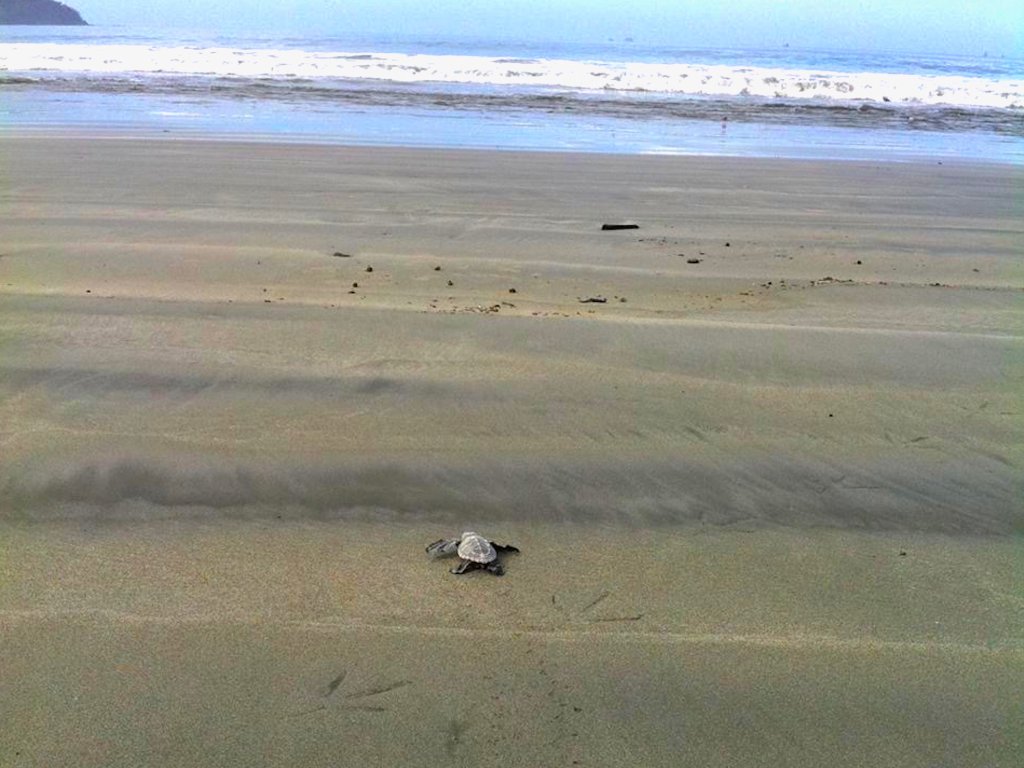 In Costa Rica, 5 of the world’s 7 species of sea turtles nest year-round along the Caribbean and Pacific coasts. If you want to see sea turtles on your trip to Costa Rica, plan according to the turtles’ nesting season on the beaches with activity during your visit. Costa Rica is literally a coastal territory rich with reefs, estuaries and swampy mangrove that attracts migrating turtles that breed and return to bury eggs on its beaches. Turtle nesting tours are limited to the number of people in each group. Once you have determined when and where you are planning your visit, it is a good idea to check ahead for tour availability. Although this map includes only 4 of the 5 sea turtles that come to Costa Rica, this is easy to follow the nesting seasons.

A Sea Turtle’s life-span is approximately 80 years. Of course, the sea turtles must survive a growing number of threats. Millions of years ago, turtles survived the catastrophic asteroid impact that killed the dinosaurs. Turtles survived extinction because their slow metabolism and body processes require little resources. Although the dinosaur population was wiped out, turtle populations continued to grow over the millions of years that followed.

Modern-day threats do not take away the turtle’s resources but have altered their environment. These new threats have escalated them to an endangered-species status. The most devastating threats are fishing practices that inadvertently suffocate sea turtles, human and other egg or hatchling predators, and also the shoreline development that now contributes to ocean pollution (plastics often mistaken for jellyfish), and natural areas altered with electric light and other distractions that interfere with the turtles’ rhythms of nesting and hatching.

Costa Rica is known to set aside protected areas. Responsible tours will not disrupt the turtle nesting sites; guided tours will provide income for local communities and conservation efforts. Jobs generated by tourism provide much more revenue to locals than the collection of turtle eggs. As well, tours that funnel income toward conservation also involve locals who then begin to value the turtles’ lifecycle and no longer disrupt nesting sites or illegally poach eggs from the nests. Funds also promote conversation efforts that attract thousands of foreign volunteers who support a skilled workforce for sea turtle protection.

Costa Rica has two of the world’s 8 beaches where the Olive Ridley Sea Turtles nest in great masses, called an arribada. Visiting Playa Ostional or Playa Nancite, you will be able to see turtles every month of the year. Ostional is a perfect example of how the influx of tourism dollars and a program allowing locals to maintain control over the protected area by legally harvesting eggs from doomed nests. The community patrols the beach. Locals understand that harvesting is restricted, and when thousands of Olive Ridley sea turtles arrive in single arribada, when there will be “doomed nests” and harvesting eggs is welcomed.

The Olive Ridley arribadas occur year-round but are denser and the most dramatic toward the end of the rainy season in August, September, and October. All sea turtles are sensitive to ocean tides and moon phases. The Olive Ridley sea turtles come to the beach between the last quarter and the new moon.

WHEN TO SEE LEATHERBACK SEA TURTLES

The Leatherback sea turtles come to nest on the beaches of Guanacaste’s Nicoya Peninsula more than any other location on earth. The Las Baulas National Park opens in late October until the nesting tapers off in mid-February. December and January are the best months to see the Leatherback sea turtles nest. Leatherbacks swim thousands of miles a year and continue to return to this beach, although sadly, their numbers continue to drop every year. This sea turtle is one of the largest in the world, weighing just under 700 kilos. For perspective, a Leatherback sea turtle is about the same size as a Mercedes Smart Car. Not only is it breathtaking to see a descendent of the dinosaur era in real-time, nesting on the beach, but when the sea turtle is also about the size of an electric car, that just adds to your bewilderment.

WHEN TO SEE GREEN SEA TURTLES

Costa Rica hosts another of earth’s bigging nesting seasons: Tortuguero National Park receives approximately 20,000 Green Sea Turtles each year. As the world’s Green Sea Turtle populations have declined, they are on the rise by about 500% in Costa Rica. Between July and the beginning of October, the turtles are laying eggs. Hatchlings emerge from the sand by mid-August, when you might get to see the first laid eggs hatch and catch a few latecomers arriving to nest.

WHEN TO SEE HAWKSBILL SEA TURTLES

The Hawksbill Sea Turtle is the least likely species you will find in Costa Rica. The turtle nesting season coincides with the rainy season, May to November. Hawksbill sea turtles arrive at various locations on the Atlantic coast in the highest recorded numbers in September. The Hawksbill Sea Turtle can reach 80 cm. It feeds mainly on sponges, which are often toxic, but body fat absorbs the toxins without making the turtle ill. Their meat, if consumed, is then is potentially poisonous. The main threat to the Hawksbill Sea Turtle are those predators seeking is shell to create trinkets.

WHEN TO SEE LOGGERHEAD SEA TURTLES

5 Insider Tips to See a Quetzal in Costa Rica

5 Common Parrots of Costa Rica and Where to See Them