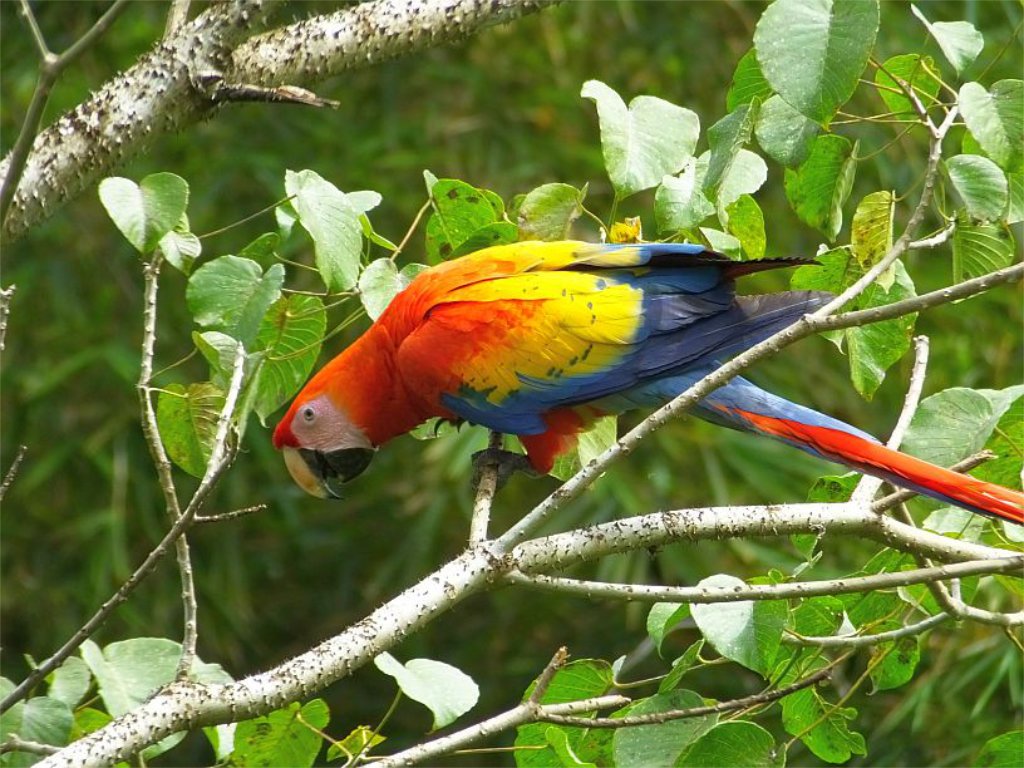 In Costa Rica, the tropical habitats of the Pacific lowlands resound with life. When watching birds, the morning birding can get so busy, it can even be hard to know where to look first! Wrens and antbirds warble from the undergrowth as parakeets chatter and flies overhead. A stunning Gartered Trogon shows off its purple, green, and yellow colors as it perches on a nearby branch and is nearly eclipsed by a beautiful Turquoise-browed Motmot!

More tropical birds fly into view, one after another, but when Costa Rica’s main star of the avian show makes an appearance, it truly takes center stage. That special bird is the Scarlet Macaw and thanks to effective protection, Costa Rica has become the easiest and most accessible place in the world to see it.

Historically, the loud calls and bright colors of Scarlet Macaws decorated tropical forest habitats from southern Mexico all the way to Brazil. Although large numbers still live in remote corners of the Amazon, deforestation and poaching of their nests have eliminated this big beautiful parrot from much of Mexico and Central America. In South America, it almost only occurs in places far and away from settlements but in Costa Rica, Scarlet Macaws can be seen in wild forested areas, near towns, and even right next to popular beaches!

It seems that in Costa Rica, the spectacular red parrots have realized that people mean them no harm and have learned to trust them.

Although they don’t live right at Villa San Ignacio, Scarlet Macaws can be easily seen after a quick hour drive to the Pacific Coast. Here’s how you can watch them:

Tarcoles is a seaside village adjacent to one of the Scarlet Macaw’s oldest strongholds, Carara National Park. Each day, groups of macaws fly to and from the rainforests of the park to forage in seeding trees right around Tarcoles, sites south of there, and even in dry forests as far north as Tivives. This means that although the most reliable area for them is Tarcoles and in the national park, you can also find macaws on any number of coastal side roads in that area.

The Beach Almond grows along beaches in much of Costa Rica. Fortunately for the macaws and people who like to watch them, the big parrots often eat the seeds of this tree. They often do this right around Tarcoles, especially near the beach just north of the village.

Although you can’t miss a Scarlet Macaw in flight, when they are feeding, they can be surprisingly unobtrusive. To locate them, listen for loud parrot-like calls and screeches.

Since they can’t seem to stay quiet for long, you will eventually hear them!

Since macaws move back and forth from feeding areas, another good way to see them is by picking a good vantage point and waiting for them to fly past. The La Barca Road that runs in front of Cerro Lodge is a good spot as is the Tárcoles “Crocodile” Bridge and the parking lot of Carara National Park.

After getting your fill of Scarlet Macaws, celebrate with happy hour drinks back at the Pandora Restaurant because, incredibly, these amazing birds are just an hour’s drive from Villa San Ignacio.